Security Culture Person of the Year Award 2017 goes to…

During a meeting of the Security Culture Community in Oslo, June 2017, Kai Roer, CEO of CLTRe and founder of the community, awarded Chris Karelse and Martine van de Merwe from the Netherlands as Security Culture Persons of the Year 2017.
To quote Kai’s words during the award ceremony:

Of course Chris and Martine were honoured to be awarded this valuable prize. It encourages them to keep on working on the community. Given the social importance of information security, they consider it important that as many people as possible will be made aware of the risks to privacy and information security and the impact of their own behaviour. This will be done faster if we learn from each other and work together to develop greater knowledge about security culture.
In 2015 the name Security Awareness NL seemed to be appropriate, even more because of the fact that awareness (the English word) is very much integrated in the Dutch jargon among professionals and everyone else. Now two years later it’s a good time to leave the “awareness” part and rename the community valuing culture and behaviour change. The new name will be chosen in cooperation with the members.

More about the community Security Awareness NL
The community Security Awareness NL is a professional platform for (information) security awareness and security culture professionals in the Netherlands. As a community we strive to further develop and strengthen Security Awareness in the Netherlands. We do this from Awareness to behavioural influence and culture. We share knowledge and experiences online and offline. We are an independent networking group and represent the Security Culture User Group in the Netherlands (users of the Security Culture Framework) and the Dutch chapter of the Securing The Human community (SANS Institute).
We started the community in autumn 2015 and by the end of June 2017 we have over 390 members. In the vivid community on LinkedIn we share content and reach out to each other. But we are more than just an online community. We organised several meetings where we learn from each other, improve the profession and have a lot of fun doing so. For instance we had a meeting on security awareness and gaming, where members shared their experiences, successes and critical comments on gaming as an awareness tool. In an other meeting we debated the challenges of our profession. Over 30 professionals attended that meeting. In another meeting we started developing our manifesto.

The founders of the community Security Awareness NL
Driving forces behind the community are Chris and Martine. Autumn 2015 Chris came up with the idea to start the community and Martine didn’t have to think twice to join him. We started the community because we saw a lack of cooperation, networking and development of the profession. We believe as security professionals we should work together and learn from each other for our shared goal of a safer and more secure society. We are full of plans when we look at the future of the community.

Chris Karelse is passionate about the human, soft tech part in security. This passion brought Chris to develop multiple courses on security awareness and the human factor in security for various academies and organisations. Chris was multiple times evaluated as best teacher. Chris previously worked as senior training consultant and changemanager. Since 2014 Chris is working in the Security & Intelligence department of ABN AMRO Bank.

Martine van de Merwe believes privacy is essential to freedom. People are key to ensure privacy. That’s why Martine in 2014 has decided to focus on information security culture in healthcare and has started her own business PrivacyLab. With some decades of experience in IT advisory and IT auditing Martine is knowing what she’s talking about. She developed the PrivacyLab model for privacy culture and awareness, a six-phase framework to help healthcare organisations to work effectively on an information security culture. 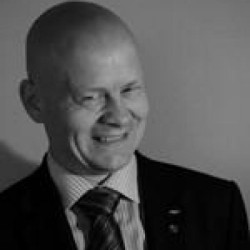 Engage me!
Kai Roer
Creator of the Security Culture Framework at CLTRe
An engaging and award winning specialist on security behaviors and security culture, I provide organizations around the world with advice on assessing, building and maintaining good security culture using the Security Culture Framework. I am working with researchers and practitioners worldwide to bring insights on human behavior from a security perspective, thus creating better products, services and organizations.

Engage me!
Latest posts by Kai Roer (see all)

The Security Culture Framework by The Roer Group is licensed under a Creative Commons Attribution-ShareAlike 4.0 International License.
Based on a work at https://scf.roer.com.